Randwick races are run at Royal Randwick Racecourse, which is run by the Australian Turf Club (ATC). Prior to February 2011 it was run by the Australian Jockey Club which also operated the Warwick Farm Racecourse while the Sydney Turf Club operated the other two major Sydney racing tracks at Canterbury and Rosehill Gardens, Rosehill. Randwick racecourse is undergoing a $115 million redevelopment between the end of 2011 and mid-2013.

Royal Randwick Racecourse hosts some of the most exciting Sydney racing that you will see with five Group 1 races in the Spring including the Epsom Handicap over 1600 metres and the Metropolitan over 2400 metres. In the autumn there are 10 Group 1 races spread over 3 weeks, including Australian Derby day and the big Doncaster Handicap meeting which is a great day for the punters betting on Sydney Racing. Randwick race fields can be large and offer great each-way value for punters who don’t fancy betting on red-hot favourites.

The two Sydney mile races are what makes the Randwick track what it is today but there are also plenty of other Group 1 races that make their own mark on the Sydney racing calendar throughout each racing season. 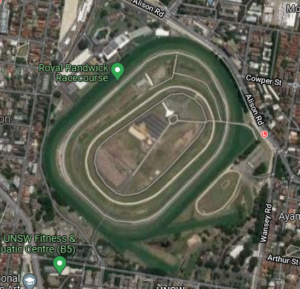 Getting to Royal Randwick Races

You can use public transport to get to Royal Randwick races. You can catch the 372, 374, 376 and 339 buses from Central Station to get you to the Randwick races.