The Melbourne Cup is without a doubt Australia’s most famous horse race and has long been regarded as the ‘race which stops a nation’. 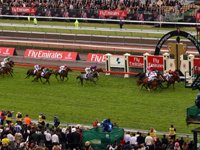 The race is certainly the highlight of the Spring Racing Carnival and includes a field of both Australian and International Horses all looking for a place in racing history.

What Time is the Melbourne Cup Race 2020

This years Melbourne Cup Day will be held on Tuesday 3 November with the main race getting underway as Flemington Race 7 at 3pm (AEST). Check your local guides for tv coverage.

Melbourne Cup Day typically features 10 races on the event card with Race 7 at 3pm the annual time slot for the big race. The Melbourne Cup is the only Group 1 race of the day alongside two Group 3’s and four Listed races to round out the schedule.

(All race times listed are AEST)

The total prize money for the cup now stands at $7,750,000 making it one of the richest races in the world. The prize pool is split between the top 10 runners in the following amounts.

See table below for a snaphot of past winners of this nation stopping event, to view all past cup winners including jockeys and trainers then simply click through the link below.

View all past Melbourne Cup results

The Melbourne Cup Carnival is certainly the highlight of the Victorian spring racing season and is held each year at Flemington racecourse. The carnival features four days of world class racing and takes place in early
November each year.

The first day of the Melbourne Cup Carnival kicks off with Derby Day on Saturday 31 October 2020. The feature race of the day is the Group 1 AAMI Victoria Derby over 2500m for three year olds. With a total of four Group 1 races on the cards this is a day for the racing purists.

Next up on the Tuesday 3rd November 2020 is the big one, Melbourne Cup Day which features a ten race card program with the Group 1 Emirates Melbourne Cup over 3200m the obvious feature event of the day.

Later that same week on Thursday 5th November 2020 will see what is traditionally known as Ladies Day once again fill up the stands at Flemington for Oaks Day. The feature event of the day for some is the fashions on the field but for the racing fans it is the Group 1 Crown Oaks over 2500m for the fillies.

Rounding out the Cup Carnival is Emirates Stakes Day on Saturday 7th November 2020. Known now as “Family Day” the front lawn on the Flemington straight will be packed with kids and parents enjoying a relaxing picnic along with a host of other special activities set up by the VRC. The feature race of the day is the Group 1 Emirates Stakes over 1600m and is a great way to finish off an action packed week of racing.

The Melbourne Cup two-mile handicap was introduced in 1861 and is now the richest handicap in the world with prize money of over $7,700,000.

Sponsored by the VRC, the Melbourne Cup is for 3 year olds and older and is run over a 3200 metre course. Held on the first Tuesday in November at the Flemington Racecourse, millions of Australians from all walks of life stand still to watch a single horse race that lasts no more than a couple of minutes.

The first ever Melbourne Cup was won by a horse called Archer with the event featuring 17 horses. The prize money on offer back then was £170 plus a prestigious gold watch. With over 150 years of history, the Melbourne Cup now draws over 100,000 people to Flemington Racecourse every year.

Flemington Racecourse – How To Get To The Melbourne Cup

The Melbourne Cup is held at Flemington Racecourse which is located in Melbourne, Victoria. The track is situated alongside the beautiful Maribyrnong River and the racecourse is now listed as National Heritage site.