Don Scott Article – Summary of his thoughts on weight (Part 1)

Don Scott Article – Summary of his thoughts on weight (Part 1)

Don Scott was a well-known punter, mathematical genius, class, and weight standards guru and to many, he was the ‘Father of ratings.’ Don Scott through his books has taught punters how they can beat the bookmakers at their own game by analysing class, form, weight, framing value prices, and taking advantage of overlays. His book ‘Winning More’ discusses the Value Revolution, what punters should know about class and weight and how to produce accurate and complete true performance ratings. Over the next couple of weeks, I am going to be diving into the book ‘Winning More’ and sharing some of the thoughts that Don Scott had around some of the key elements above.

In this article, I am going to go over the Chapter in the book that is entitled “Everything A Punter needs to know about Weight”. Within this chapter, Scott summarises his discussions with 15 different maxims, and this is what we are going to discuss throughout this article, the first half of these maxims and what they mean.

Maxim One: “All factors that affect the rating of a horse are expressed in kilograms”

The chapter starts off with an insightful quote – “Horse against horse, weight against weight…are the best lines to follow as to the superiority of one horse over another.” Scott goes on to discuss that weight has always been the basis of thoroughbred racing and that the basis of his method of rating the class and quality of a race as well as rating the true performance of every horse in yesterday’s race. Weight also expresses everything that happens during the running of today’s race and measures every factor that contributes to the performance of every horse in tomorrow’s race. Not much more needs to be said about this maxim, and it is pretty to the point.

This maxim speaks for itself. Scott goes on to use the comparison of two horses of equal ability, equal weights, and equal jockey ability, it’s a dead-heat. If you then add 1.5kg of lead weight to one of their saddles, the horse without the weight wins by one length. This is a common occurrence in Don Scott’s belief that 1.5kg of weight is equivalent to one length on the track. He further outlines a simple table, listing the losing lengths and their equivalency in kilograms. Using the simple formula, if a horse is beaten by one length, they will need to meet the winner 1.5kg better off in their next contest to have an equal chance. Scott further discusses that ‘experts’ seem to think that weight is more vital over longer distances and that they choose to ignore not only the length but the speed of the race and the pressure of some of the horses. He experimented over the years and kept coming back to 1.5kg per one length.

Maxim Three: “Some outside barrier positions are a disadvantage to a horse. This disadvantage can be expressed in kilograms”

Scott discusses around two horses again, equal in everything except this time, one comes out of barrier one and the other barrier sixteen over 1400m at Randwick. In this instance, barrier 16 is negative and disadvantages the horse by one length, therefore it is the equivalent of carrying an extra 1.5kg. He goes on to discuss a lot of things the punters know well like outside barriers aren’t always a disadvantage if the horse is a good starter and can glide across and that the inside isn’t always beneficial, especially if you’re a slow starter. He then discusses theories and statistics about barrier positions and how they don’t give the full picture and can be very misleading. He quotes himself from his first book, “The bookmakers take a look at the barrier draw and decide to bet grossly extravagant prices. I accept them greedily”. He further discusses that every racetrack is different and what is a disadvantage at one might not be a disadvantage to another, and that is the thought when it comes to different distances. Scott makes reference to the tables he has later in the book of his 18 years of data collection, and that his calculations are based on a fast or good track and that on a slow surface, the disadvantage of a wide barrier is less and on a heavy, it completely disappears. The table on the next page discusses the different barriers and distances at Randwick where wide draws are expressed in kilograms based on disadvantage. Scott finishes off by quoting his first book again, “In racing, starts are of minor importance. It is always the finish that counts.” 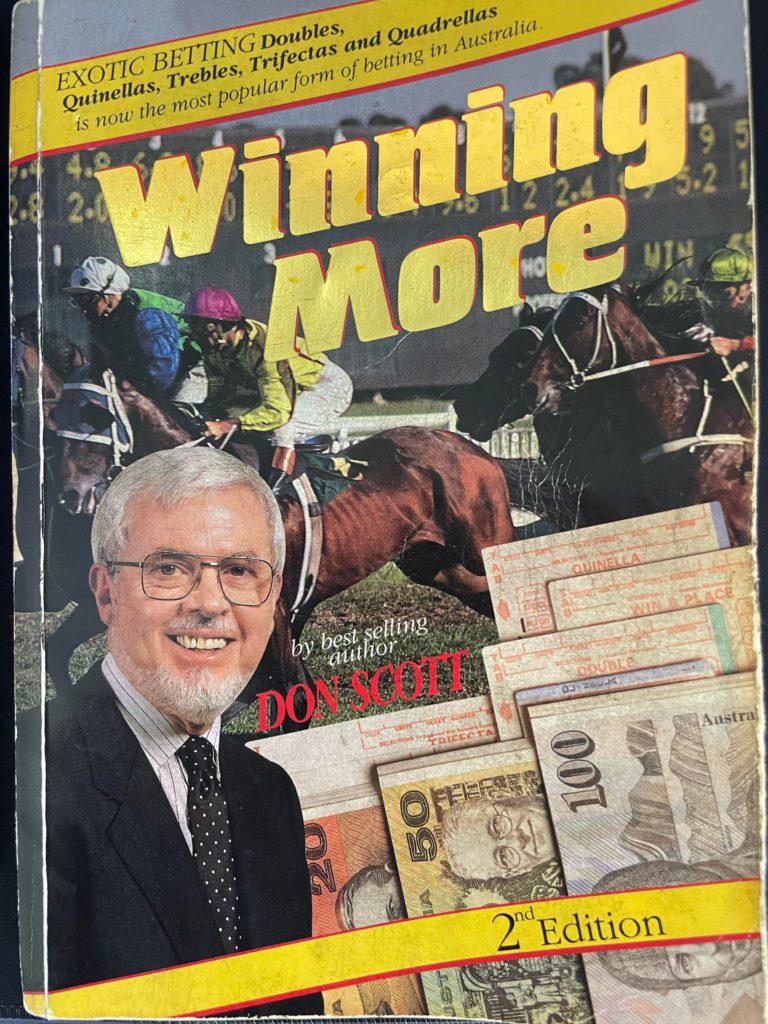 Maxim Four: “A less skillful jockey is a disadvantage to a horse. This disadvantage can be expressed in kilograms”

This one seems pretty self-explanatory, but there was nothing like this previously. It goes on to explain that a jockey can disadvantage a horse by one length or 1.5kg when it is converted over. Take our best New South Wales jockey in James McDonald. He would not disadvantage a horse in terms of extra kilograms carried. Hypothetically, say Tommy Berry, Nash Rawiller and Hugh Bowman were next in line, you could rate them at 1kg which would be 1kg off perfection. Using the same example given but using modern jockeys, for this exercise, the apprentice is given a weight of 10kg (worst) but does have a 3kg claim. If Hugh Bowman (1kg) and this apprentice (10kg) jumped on horses of equal ability, and both weighed 51kg (hypothetical), the horse would carry 52kg of Bowman with the extra kilogram, and the apprentice would carry 61kg based on their skills. The apprentice would get a 3kg claim, but that is still 58kg, therefore Bowman has a 6kg weight advantage in this race or four lengths in terms of skills alone. Even today, we can compare jockeys via skill, but Don Scott has shown us here, how to convert those skills into kilograms and lengths.

We often read about horses being checked, blocked in the straight, or even being slowly away, but in this maxim, Scott explains how we can express these disadvantages in kilograms. Say there are two horses running, both have no weight or barrier disadvantage and both jockeys are skilled. Rounding the home turn, Horse 1 takes the turn wide and is checked in the straight before going down to Horse 2 (who had everything go perfectly) by a length. This would be expressed as Horse 1 carrying an extra 1.5kg of weight. Some of these disadvantages are described by Scott like slowly away, checks, blocks, wides, erratic running, easing, bad riding, faulty gear, and injuries. Scott goes on to discuss how these compensations vary. For example, anything bad happening prior to the home turn are of minor importance as it is easier to recover therefore when giving out your compensation, you would never use the full amount. But if this happened in the straight, you would give the full amount as it is of a more critical stage of the race. In a later article when we cover another chapter, we can further investigate what Don Scott compensates for these disadvantages in running.

Maxim Six: “The form of horses rarely remains steady. Horses are usually either improving or deteriorating. This improvement or deterioration can be expressed in kilograms”

This maxim is short and sweet. If absolutely everything is equal but horses 1 and 2 don’t run a dead-heat and horse 1 wins by a length, you would conclude that horse 1 has improved by a length or horse 2 has deteriorated by a length. You could now conclude that horse 1 is 1.5kg better than horse 2 or horse 1 has gained 1.5kg of fitness or strength/horse 2 has lost 1.5kg of fitness or strength. We always talk about horses improving or holding form, this gives us a tool to use in terms of the conversion of lengths to kilograms.

Maxim Seven: “When horses compete on equal terms, their performance can be rated in kilograms, depending on their finishing position”

Don Scott has created a simple rating for horses based on their performance. In this virtual races, three horses are carrying the same weight, the same skill of the jockey, and have no barrier or running disadvantages, therefore all horses are racing on equal terms with no advantages or disadvantages. horse 1 wins the race, horse 2 finishes one length back in second and horse 3 finishes three lengths back in third. Because all these terms are equal, it is safe to say horse 1 is the best, horse 2 is one length worse than horse 1, and horse 3 is three lengths worse than horse 1. Scott goes on to convert them to kilograms. Horse 1’s rating of their performance is 0kg, horse 2 is -1.5kg, and horse 3 is -4.5kg. He has just given us, the average punter a base to start our own ratings and adjust from there.

We are just passing the halfway mark of the chapter and we have already established that one length is 1.5kg, we can then adjust our lengths/kilograms based on various factors and using our own knowledge and opinion around jockeys, barriers, and many other factors.

One thing we can conclude from this so far is that Don Scott was ahead of his time and a lot of information that he discusses is now common knowledge or embedded into our betting culture.

That concludes Part One of our two-part article around Don Scott’s views around weight. In the next article, we will cover maxims eight-fifteen.